Growing up inside a successful family business 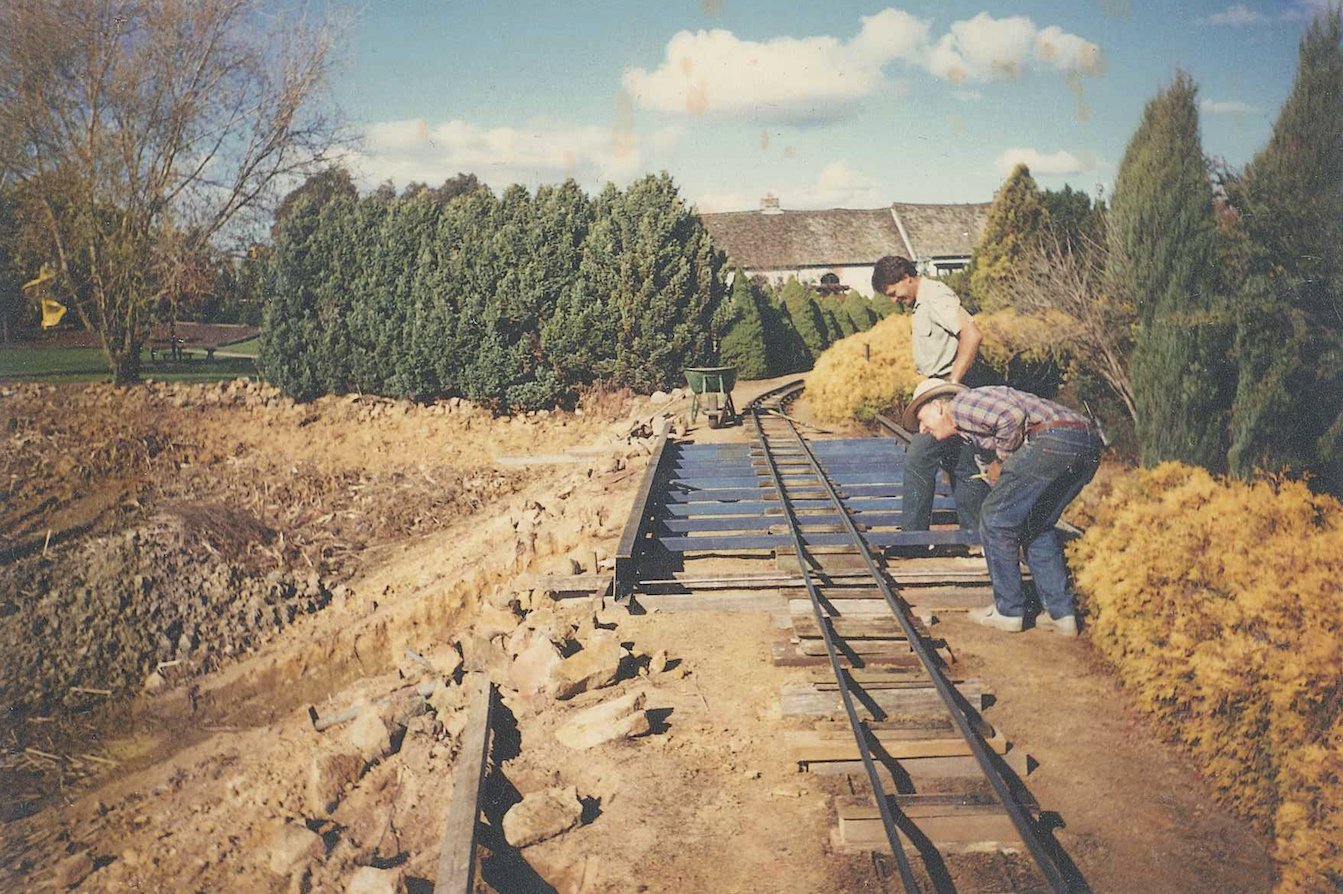 As the eldest child and only son, Mark Sarah was just 11-years-old when his parents, Doug and Brenda Sarah, began making plans for their unique tourism business. He had just turned 17 when the business first opened to the public on 3rd November 1979. Forty years later, Mark is still proudly and heavily involved in the management and direction of Cockington Green Gardens.  He has known nothing else in his working life and he wouldn’t have it any other way.

Events and places visited during the Sarah family’s 1972 trip to the UK which sparked the project were still vivid in Mark’s memory. He recounted, “A fair bit of it’s pretty clear as I was about 10. I remember visiting the family, seeing the castles and the model village. I remember the trip over quite fondly because it was by boat. A month at sea is pretty memorable when you are 10-years-old.

Mark’s childhood, early teenage years and adolescence were dominated by conversation, planning and preparations for the new business. There is absolutely no hint of regret about that, just lots of pride and the sense of achievement he feels for his parents. He also takes the responsibility of their legacy very seriously.

The business has shaped Mark’s own professional qualifications. He never considered himself particularly academic but spending any time with Mark and one gets the distinct and immediate impression of a person very well educated, researched and with a capacity to communicate succinctly and articulately. These attributes have obviously been honed by an inquisitive mind, lots of reading, and a confidence in mixing with a broad range of people from a young age.

Mark began his greenkeeping (turf management) apprenticeship in late 1979, early 1980. Clearly, the business took him in this direction, and he confesses to being “pretty typical” of most of his mates back then.

Mark recalls, “Not being a great scholar, I was probably destined to be an apprentice of some kind. I think it was the fact that greenkeeping was perhaps convenient in the first place because of the new business, and I wasn’t sure what I was going to do with my life at that stage.”

Many of Mark’s recollections were focussed on the incredible sacrifices made by his parents. Mark is an open book in terms of the pride and admiration that he has for his Mum and Dad. He was and still is in awe of the energy they drove into the business. At the same time Doug and Brenda were establishing their business, both of them needed to work nights, weekends and whenever else to keep the finances going and the dream alive.

“They were tirelessly working away. There were plenty of nights when Mum wasn’t at home as she worked in the accommodation industry when we had dinner as Dad was famously cooking his fish fingers and chips and a few other things,” Mark laughed as he recounted his Dad’s culinary skills.

When asked about what he has learnt most from his parents, Mark says, “I’ve certainly learnt that anything that’s worthwhile you have to work hard for it, it’s a given that working hard is the only way to get what you really want. Success comes to those who put it in.”

Mark not only witnessed examples of hard work, sacrifice, commitment, conviction and passion, he sensed the strong values in his parent’s love for their family and the way in which they included family in their dream. He understands their absolute honesty on every front and draws on that honesty and the passion of his Mother and Father every day he arrives at work.

As one of three children, Mark has shared the journey with his two younger sisters, Sally-Anne and Melinda. He insists that this has been a quite normal relationship but being in the business has changed some of the dynamics and the reality is that he doesn’t know anything different. It’s difficult to know if the relationship would have been any different had they not all been involved in the business.

“I probably do have that different relationship with Melinda because she lives away now. Sally and I have worked together for more than 30 years with a few small breaks. I think that running a business can sometimes get in the way of being a family at times. Most of the time we have a healthy respect for each other’s opinions, and we carry the legacy of Mum and Dad’s work,” added Mark.

In a business that is totally reliant on people, one of the major responsibilities is to talk with your customers. Mark has and continues to spend large slices of his time speaking with visitors in the display. The feedback has helped shape the attraction and stay in touch with the needs of guests. The opportunity to speak with patrons is too good to be ignored and the questions and inquiries are varied.

When talking with visitors, Mark reveals, “The first thing they say is that they appreciate the work that you have done and then specifically they want to talk about something horticultural first, about a flower or a particular tree that’s in blossom at the time. It’s like guests are looking for a reason to have a conversation with you to get more information, and this is fine.”

Mark is clearly well attuned to the customers he confessed earlier not to have lost the love for. In 40 years, he has seen the generational changes. He’s met people who took their children to Cockington Green and who are in turn taking their own children to the attraction that they grew up loving. He thoroughly enjoys the conversations he has with guests and appreciates that people are visiting for many different reasons.

The legacy of ensuring all visitors enjoy their experiences at Cockington Green has not changed in 40 years of business although there is plenty that has changed. Everyone in business has felt the impact of technology. Older people travel differently today, international visitors have altered their traveling habits, domestic demographics have changed, competition has increased. All of this has altered Cockington Green Gardens’ operations over the years.

Mark’s photography skills have had to alter significantly over 40 years. His youthful experiences were of taking photographs with instamatic cameras with push in cubes on top for flash photography. Today, everyone has a digital camera at their disposal and the immediacy of technology no longer means images are shared weeks later – the pics are uploaded immediately for the world to see.

Australia is no longer meat and two veg anymore. Our population is so much more multi-cultural. You can see a difference in the gardens, particularly in the afternoons. We have lots of visitors from Asia and the Sub-Continent or of those origins in addition to the wide range of Europeans. I also think there is a whole new generation of seniors that are probably more likely not to jump on a bus. The seniors we used to have came out of the second world war and lived in austerity times whereas the next generation were baby boomers, independent travellers. They probably have super and without the austerity of the previous seniors,” Mark offered authoritatively with the benefit of 40 years observing tourists and tourism.

For a business that is open to the public every day of the year, and closed only on Christmas Day and Boxing Day, it makes for some interesting statistics. At the time of writing this article, it meant that around 14,350 days had elapsed since opening on 3rd November 1979. Of those 14,350 days, for around 80 days the display was officially closed, and save for one or two other events and some horribly wet weather when closure was forced on the attraction, there has been little time not to be thinking about the operation.

Mark admits that sometimes his own immediate family has had to take a back seat especially when he has been at the business seven days a week from dawn to dusk. He is relieved this doesn’t happen so much now but understands there are times when the business still needs him more often than other times. He understands that he has probably missed some things that other people get to enjoy who aren’t involved in a business like this.

Mark’s views on the legacy he sees were summed up in his usual thoughtful way. “We sometimes spend so much time focussing on what we’ve got and maintaining what we’ve got. I’d like our legacy to be that we have moved into the 21st century and we’ve actually connected the 20th century attraction we had into the 21st century with technology. We don’t spend enough time punching out new goals because we are so engrossed in the day-to-day.”

The objective expressed by Doug Sarah of a display of Australian buildings is shared by Mark. That pathway is opened up with the soon to be implemented boundary tree removal and replacement program. A legacy to his parents is important and the closeness he feels to his Mum and Dad is both important and easily expressed by Mark.

Mark has done it all and seen it all over 40 years. He’s had lots of laughs, lots of enjoyment. Working with his Grandfather, Bill Rose stands out for him as one of his greatest joys. He said he learnt so much from that experience and has been able to pass on some of those lessons to his own family. Working with his Mum and Dad has added to a special relationship. With all of those experiences, it’s clear that the business is still in very good hands and the next 40 years is looking good