Cockington Green’s international display was established in the late 1990’s. This followed consideration of better utilisation of the land which previously was home to the small lake around which the miniature steam-train circled. There were many months of work involved in firstly draining the lake and then creating access to the new international display area underneath the miniature steam-train line.

The process for developing the international display commenced with letters being written to all High Commissions and Embassies in Canberra. Those who responded where engaged in detailed discussions to negotiate which building would best represent their country, a time-frame within which to construct, and last, but not least, from where the funding for the display would come.

Many of the early buildings in the International Display were supported via an Australian Government regional tourism funding initiative designed to assist in the development of the nation’s tourism infrastructure.

Displays were established either with the full funding support provided by Governments of represented countries or in conjunction with their local communities and, in some cases, by the local communities themselves.

Once the building selection and funding issues had been addressed, construction of the buildings started. The area around each building’s location was landscaped catering to its display needs, and to replicate as closely as possible and practical the landscape within which the original building was set.

Upon building completion, Cockington Green often held inauguration ceremonies with the display host country where many of their dignitaries and people from their communities were invited to celebrate this special occasion.

The early days of establishment of the international display gained momentum through wonderful relationships with people such as former Colombian Embassy Chargé d’affaires, Marylu Nicholls and her associates along with Mala Maree, a former official of the South African High Commission.

There was also the infectious vibrancy of the former Slovak Ambassador, Dr. Anna Tureničová and the incredible enthusiasm of Indonesian Education and Cultural Attaché, Dr. Aria Djalil who made possible the historical Borobodur Temple display. This building was fully crafted in Indonesia and shipped to Canberra for display. Models from Lithuania and the Philippines have also been constructed off-site and shipped in for display.

We continue to work closely with Embassies, High Commissions, community groups and governments from around the world to this day on expansion of the display, often having visiting people of note from these wonderful countries walking around the display admiring other country’s buildings as well as their own.

Sponsored by:   Embassy of the Argentine Republic

El Caminito means “little walkway” or “little path” in Spanish. The display of Caminito is of a thriving and lively street museum and traditional alley way in La Boca, a well-known neighbourhood of the Argentinian capital of Buenos Aries. This vibrant alley full of history and charm acquired cultural significance through inspiring composer Juan de dios Filiberto’s music for the famous tango, ´Caminito’ in 1926.

Curiously, the words of the ‘Caminito’ tango were written by poet Gabino Coria Penaloza and referenced another alley in Argentina, whilst it was the words of singer Carlos Gardel in the tango toast of Argentina which made Caminito famous. Some of those words were ‘’Desde que se fue triste vivo yo, caminito, amigo, you también me voy.” Roughly translated, this means “Since she left, I’ve lived in sadness; the alley, my friend. Now, I’m also leaving.”

Like many places with a romantic aura or nostalgic flavour, Caminito has its beginnings in lesser splendour as a bridge over a tiny stream before becoming an abandoned railway area and subsequently a dump. Artist, Benito Quinquela Martin is credited with Caminito’s restoration from his paintings of the rough port life around La Boca. 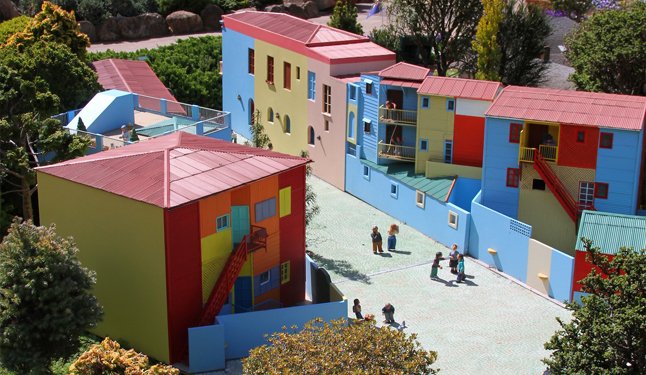 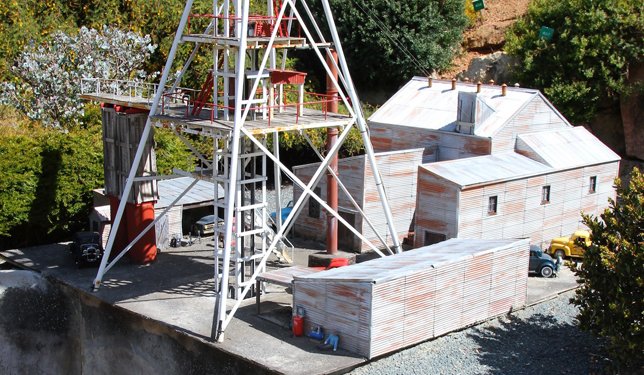 Location:   Based on Central Deborah Gold Mine, Bendigo, Victoria

Model Construction by:  Partially constructed by Anthony Barker as part of his year 12 assessment, the remainder was completed by Cockington Green Gardens.

The Central Deborah Gold Mine operated between 1939 and 1954 extracting almost one tonne of gold from the ground with almost 400 men employed in the process. In today’s money that converts to around $50 million. It is noted that at the peak of operation of the Central Deborah Gold Mine, it reached a depth of 412 metres with some 17 levels with 15kms of drives and cross-cuts (tunnels).

In 1970, with pressure being applied by the local community, the Bendigo City Council purchased the still largely intact mine for $6,000. This purchase ensured a strong link would remain for the city with its historic past as a focal point as one of Australia’s most recognized gold regions.

Today, Central Deborah Gold Mine serves as one of Bendigo’s best-known attractions with its Nine Levels of Darkness tour allowing guests to venture down to Level 9 of the mine some 228 metres underground.

Gold Discovered in Bendigo:  Circa September 1851

Reputed as the oldest building in Goolwa, an historic town on the great Murray River about 100km south of Adelaide, the old Superintendent’s Railway Cottage is National Trust Property. It was built in 1852 from what was plentiful local limestone and includes an unusual, but simply supported, barrel vaulted roof.

The building has historical significance because of its links with South Australia’s first railway between Goolwa and Port Elliot as well as its standing as one of the oldest structures in the area. After being initially occupied by the first superintendent of the Port Elliot-Goolwa railway line, Mr. Buxton Forbes Laurie, the then South Australian Governor, Sir Henry Fox Young, used it briefly as a summer cottage.

In recent times, this well preserved and historic building has variously been home to a bookshop and café as well as being home to a local community radio station. The model on display at Cockington Green Gardens was gifted by Paul and Pauline Nicholas. Paul and Pauline had their own model village business at Victor Harbour not far from Goolwa and became good friends to the Sarah family over the years.

Goolwa as the Capital:  The town was once considered a possible capital city location for South Australia.

Cittaslow:  Goolwa is Australia’s only listed “Cittaslow” town and one of the only 192 in the world. 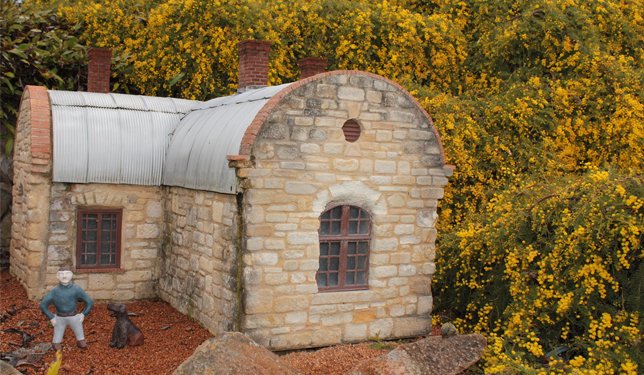 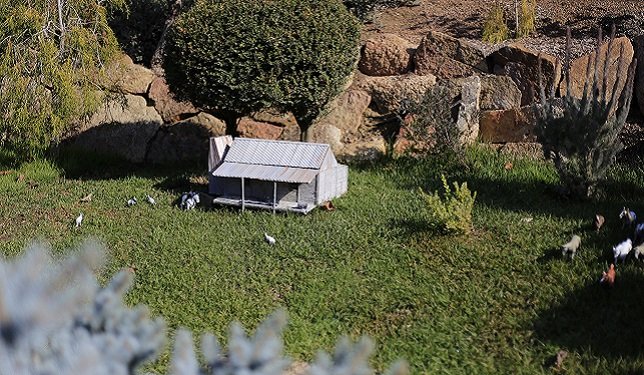 Australia’s rooftop within the Kosciuszko National Park is home to Wheeler’s Hut which was built in the early 1900s. Wheeler’s Hut is one of a number of historical huts in the Alpine region built over time by stockmen, miners, fishermen, skiers and the Snowy Mountains Authority among others.

Wheeler’s Hut is a classic horizontal two-room structure with wooden slab walls and a galvanised iron roof. Its fire hearth is a slab of stone with an iron chimney and the building is replete with an external toilet and an old iron bath tub at the front. The hut was moved to its present site in the 1920s.

Wheeler’s Hut was built by a fascinating character who went by the name of William ‘Wingy’ Wheeler, known as that because he only had one arm and was renowned for riding a horse whilst smoking and cracking a whip at the same time, even with his one arm.

The Kosciuszko Huts Association who have sponsored the Wheeler’s Hut display at Cockington Green Gardens is a voluntary organization dedicated and formed to assist with the conservation and management of huts in the alpine national park. Visit their wonderfully interesting website at www.khuts.org for more information.

Sponsored by:  Embassy of the Republic of Chile

Like large parts of Latin America, much of Chile’s architecture is of a Spanish Colonial style, particularly reflected in properties such as Casa Vega which is a typical countryside property located in central Chile.

The Casa Vega property is a 19th century building consisting of one metre thick walls with a series of interconnecting rooms. The covered veranda which encapsulates this rectangular homestead on each side is a feature of many of the rural homes of this period.

Whilst simple in terms of design and architecture, the building is both functional and practical for the climate within which it sits. Chile has become renowned in recent years for its meteoric rise in the world of architecture recognized through Alejandro Aravena being the recipient of the 2016 Pritzker Architecture Prize, referred to as the profession’s equivalent of a Nobel Prize.

The model on display at Cockington Green Gardens contains around 10,000 roof tiles, all individually cut and laid adding to its approximate 350 hours of construction.

Living in Chile:  Around 90% of the population lives in urban areas 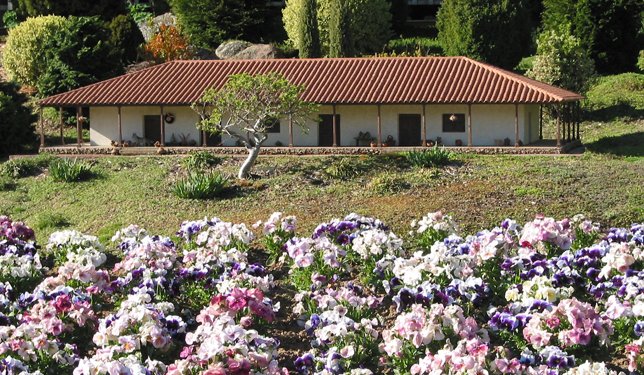