Built between 1180 and 1250 A.D. Borgund Stave Church is classified as a triple nave stave church and is no longer used for regular church functions but is now operated as a museum by the Society for the Preservation of Ancient Norwegian Monuments. The stave church name originates from the walls which are formed by vertical wooden boards or staves.

The church, built on a Basilica plan, is dedicated to St. Andrew and lies in narrow valley near Lærdel. The intricate design and construction has ensured longevity of this historic church which had another church erected next to it in 1868. The newer church assumed regular religious functions from the Borgund Stave Church which was sold to the Society for Preservation of Ancient Norwegian Monuments in 1877.

The stave church includes four carved dragons’ heads swooping from the carved ridge roof crests. Whilst not a part of the original structure, possibly additions during the 18th century, the dragons’ heads are best recalled from those found on the prows of Norse ships giving them their look of battle readiness. The church walls also have remnants of runic inscriptions on the walls of the west portal.

The architect of this inspiring church is unknown. Around the display at Cockington Green Gardens, there are plantings of several dwarf varieties of Norwegian spruces (picea abies) including ‘compacta asselyn’, ‘maxwelli’ and ‘little gem’.

Norwegian Income:  4th highest per capita income in the world 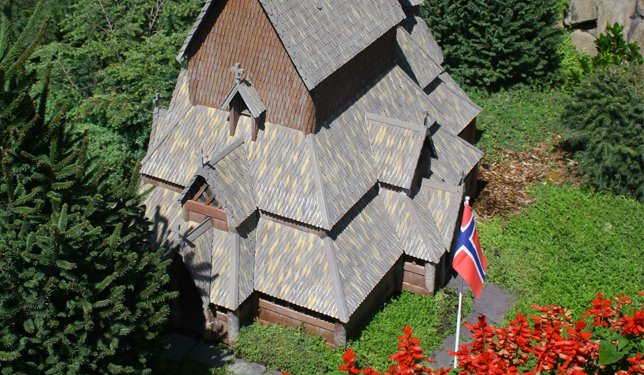 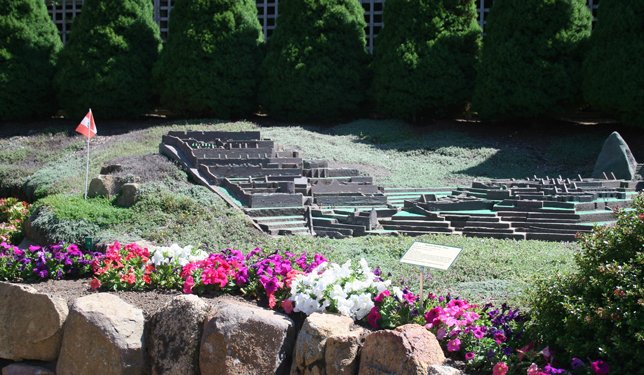 Sponsored by:  Embassy of the Republic of Peru

Variously described as remarkable and an engineering marvel, Machu Picchu which was built in the 15th century is considered one of the Seven New Wonders of the World according to a global poll in 2007. Mystery remains as to the reason for its construction with many archaeologists of the view that it was constructed as an estate for the Inca emperor, Pachacuti.

It is widely believed that Inca royalty, high priests and others retreated to Machu Picchu upon the arrival of the Spanish conquistadors led by Francisco Pizzaro in the early 1530’s. This wasn’t enough to save the Inca empire from eventual decline at the hands of Pizzaro and others who followed in his footsteps, although it is considered that the Inca empire was already in a state of weakness before the Spanish arrived.

Machu Picchu is built above the Urubamba River valley in a narrow saddle between two sharp peaks – Machu Picchu (old peak) and Hyuna Picchu (new peak). The site is around 7,710 feet (2,350 metres) above sea level possibly part explaining why it escaped Spanish detection after they took control of Cuzco just 50 miles away.

This current-day wonder was said to have only been occupied for around 80 years before being abandoned and not being rediscovered more than 300 years later by Yale University historian, Hiram Bingham in 1911. The abandonment of Machu Picchu is also a mystery although lack of water is cited as one of the reasons for its demise.

The model at Cockington Green Gardens is built to a scale of 1:100 and represents only part of the ruins of Machu Picchu.

Inhabitants of Machu Picchu:  Archaeological estimations at between 500 and 750 people at any one time

Sponsored by:  Embassy of the Republic of the Philippines and the Filipino community in the ACT

Donated by: National Commission for Culture and the Arts of the Philippines

Maranao people have their origins in the Southern Philippines and are known as “people of the lake”. A Torogan is a traditional house and a symbol of high social status built for the Sultan or Datu (Village Chief) by the Maranao people. It is considered the highest form of a Maranao Royal House and the architecture used is the most aesthetic in the Philippines.

Despite the modern developments which have been introduced in the Maranao region, Torogans over 100-years-old can still be found today, the best examples in Dayawan and Marawi City and around Lake Lanao. The Torogan is distinctive in that it is the only one with an architectural feature of the panalong, a butterfly-like end beam protruding from the front of the house.

The architecture includes geometric flowing designs and folk motifs known as Okir carved into the panalong. Intricately designed Okir is either carved or painted with the geometric forms of plants, dragons or serpents prominent in Maranao artwork. The Torogan is elevated above the ground by columns cut from trees of huge girth. Those columns or posts rest on rocks which act as rollers to prevent earthquake damage in a region synonymous with seismic activity via its location on the Pacific Rim of Fire. 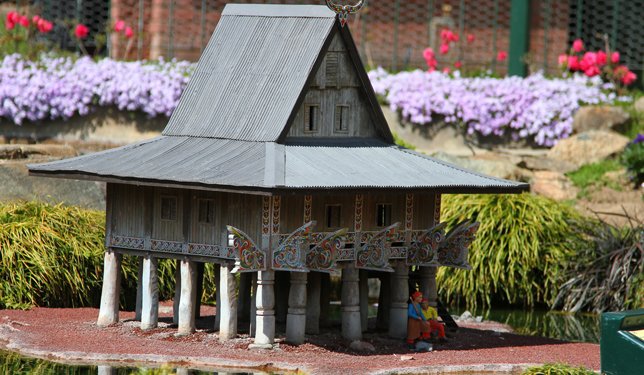 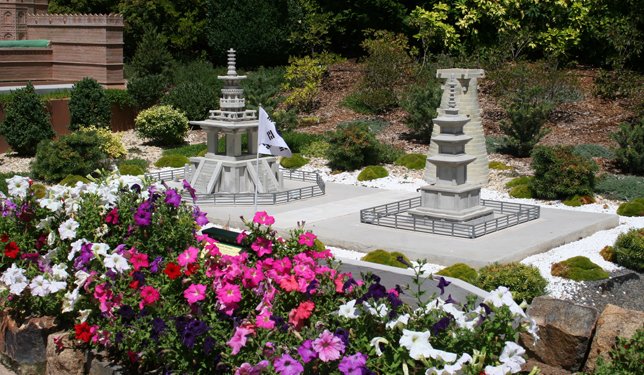 Sponsored By:  Embassy of the republic of Korea (Website)
With funding assistance from Aus-Industry Australian Tourism development Program

Dabotap Pagoda, the Pagoda of Many Treasures or of Multiple jewels, and Seokgatap Pagoda, the Sakyamuni Buddha Pagoda, are the two most famous features of the World Heritage Listed Bulguksa Temple located on the slopes of Mt. Toham. The site is classified as South Korea’s No. 1 Historic and Scenic site.

The Dabotap Pagoda and Seokgatap Pagoda are considered the most excellent specimens with their complex and ingenious architecture and their “profound philosophical depth and aesthetic charm.” Recognized as being inseparable and opposite, but complimentary eum-yang pair, a yin-yang pair. They stand together in view of the Buddha, offering a lesson in monumental stone for all who look at them.

Cheomseongdae Astronomical Observatory was constructed in the 7th century under the reign of Queen Seondeok and is the oldest surviving astronomical observatory in Asia and possibly the world. Standing at 9.17 metres tall, the observatory consists of three parts and the name, Cheomseongdae means ‘star gazing platform’. The structure is said to contain much symbolism theorized to represent various historical and astronomical figures. The Observatory is No. 31 on South Korea’s list of National Treasures.

Château de Bojnice is one of Slovakia’s most visited attractions and is first mentioned in written records in 1013 although construction is said to have commenced in the 12th century. It began life as a wooden fort but was gradually replaced by stone with the outer walls said to match the uneven rocky terrain where the building was sited. The Castle’s first owner was Matthew III Csák, a Hungarian oligarch who ruled de facto independently various parts of medieval north-western Hungary (large parts of today’s Slovakia).

The Château has had numerous owners and occupiers during its lengthy history including Czech entrepreneur, Jan Antonίn Baťa, owner of the shoe company, Bata who acquired the property in February 1939. The property was confiscated by the Czechoslovak government in 1945 when it became home to various state institutions. A huge fire broke out in 1950 resulting in substantial repairs that eventually saw the building become part of the Slovak National Museum.

The property has been the scene of numerous movies with its enchanting fairy-tale appearance and the sheer beauty of the castle setting. It is also periodically the home to the International Festival of Ghosts and Spooks where ghosts, spooks witches and vampires from around the world gather.

Australian and Slovakian ties are extremely strong in that the first person to be naturalised under the Australian Citizenship Program on 26th January 1949 was Jan Jandura, a Slovakian. A park in O’Connor in the ACT is named after Mr. Jandura to commemorate this significant event.

Velvet Divorce:  The peaceful separation of the Czech and Slovakian Republics resulted in Independence for Slovakia on 1st January 1993 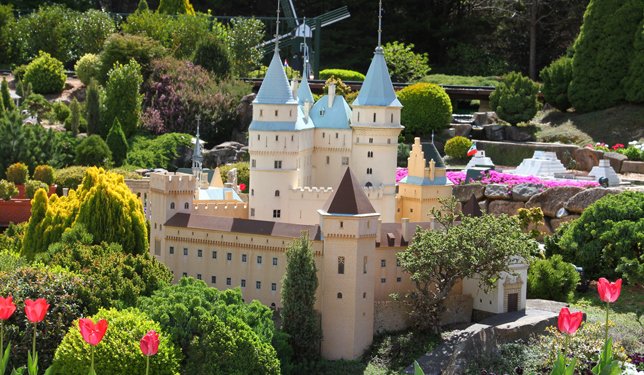