Küçüksu Palace is situated on the Asian shore of the Bosphorus in Istanbul and was commissioned by Sultan And-ul-Mejid I, the 31st Sultan of the Ottoman Empire. The small summer palace was used by Ottoman sultans for short stays during country excursions and hunting.

The palace was completed in 1857 and replaced an earlier structure which was a two-floor timber palace built around the late 17th or early 18th century. The current palace has had a number of functions, most notably that of a state guesthouse since the commencement of the republican era and today is open to the public as a museum.

The gardens of the palace are surrounded by cast iron railings, not the usual high walls associated with most other stately properties. The interior of the palace has been elaborately decorated with Italian marble fireplaces a feature as well as Bohemian crystal chandeliers adorning the ceilings. The stage designer for the Vienna State Opera had carriage of internal decoration.

It is only a small footprint of 15m x 27m upon which the building of two floors and a basement sit. The basement includes a kitchen, larder and servants’ quarters whilst the floors above are designed in traditional Turkish-style with four corner rooms surrounding a central hall.

The Bosphorus:  Waterway which forms part of the continental boundary between Europe and Asia

Istanbul to Ankara:  450km by road 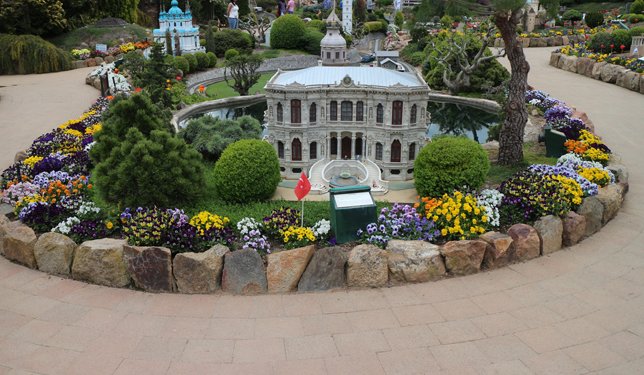 The Kiz Kuslesi story is one of complexity, historical debate and laden with mystery and mythology. The restaurant that operates today from this fabulous structure is a far cry from the first construction going back over two thousand years. Not once, but twice, has this iconic tower also featured in James Bond movies – From Russia with Love and the World is not Enough.

Mythology also gives rise to the names by which the structure is also known. It is known as the Maiden’s Tower reflecting the story of a young Princess being held there by her father to protect her from death at the hands of a snake on her 18th birthday as prophesised.

Leander’s Tower is the name that has its origins in a tragic Romeo and Juliet-type story. It tells of the love between Leander and Hero. Leander falls in love with girl (Hero – the Aphrodite Priestess); boy drowns swimming to meet girl; girl finds lover’s corpse; girl commits suicide.

The Tower’s history dates back some 2,500 years from its early beginnings when Athenian commander Alkibiades built a small tower in 411 B.C. to control the passage of boats from the Bosphorus. Beyond that, the first specific structure of the tower which exists today occurred around 1,110 A.D. under the reign of Roman Emperor Manuel Commenos.

During the Ottoman Empire the tower was further transformed for military purposes and continued to be reconstructed and repaired after variously suffering damage and destruction from fire and earthquake. It has since served as a quarantine station, a lighthouse and now as a café as well as an exclusive restaurant in the evening.

Sponsored by: The Ukrainian Association of the ACT
With assistance from Aus-Industry Australian Tourism Development Grant

St. Andrij Church is a Baroque-style architectural masterpiece by Italian architect, Bartolomeo Rastrelli and is a landmark of cultural heritage. The church, also known as a cathedral, was constructed between 1747 and 1754 and sits atop a steep hill which today is providing preservationists with challenges because of notable shifts in the structure’s foundations.

The church’s beginnings go as far back the first century A.D. when Saint Andrew was said to have placed a cross in the ground on the site where the church now sits. St. Andrij Church is one of four architectural national treasures of Ukraine as put down on the List of Mankind Treasures of Five Continents by the World Society.

The Russian Empress, Elizabeth, had a significant role in the establishment of the church as she had decided to construct a summer residence and church for herself in Kiev. The construction’s commencement took place during an official ceremony on September 9, 1747 with the laying of the first three foundation stones by the Empress.

Despite the construction being completed in 1754, it wasn’t until 1767 that the internal work and decorations were finished. Between 1825-28, St. Andrij Church underwent significant restoration following some extensive damage cause by storms in 1815. Since then, the church has undergone further repair as well as being caught up in the turbulence of politics and war but remains as an icon of the city.

Density of Ukraine: 76 people per km²

Sponsored by: Embassy of the Bolivarian Republic of Venezuela

El Capitolio was built in 1872 under the Presidency of Antonia Guzman Blanco who collectively served as President of Venezuela for 12 years over three terms between 1870 – 1887. Blanco was responsible for the construction of several other notable buildings during his Presidency.

The El Capitolio adopted a radically anticlerical design and introduced contemporary architecture to Caracas. The building has its own Oval Room, an elliptically shaped room crowned by a gilded oval-shaped dome. The dome’s ceiling has paintings that vividly depict the defining Battle of Carabobo and the Venezuelan War of Independence against Spanish colonial rule.

El Capitolio’s location was formerly the site occupied by Convent Nuns of Conception and is built in a neoclassical style with Doric and Corinthian columns. The two buildings which are interconnected are known as the Legislative Palace and the Federal Palace. The Oval Room contains the proceedings of the Constitutional Congress (1811-12) including a hand-written version of the Declaration of Independence of Venezuela.

This important building in the context of Venezuela’s history was included as a National Historical Monument on 22nd August 1992.