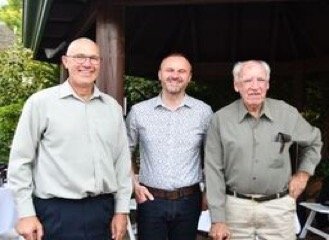 ACT Chief Minister and Tourism Minister, Andrew Barr MLA, spoke glowingly of the outstanding contribution of Cockington Green Gardens to the ACT tourism industry and local economy when he spoke to the audience gathered at a Cocktail function on Friday, November 1st, to celebrate the attraction’s 40th birthday.

The event, emceed by local ABC Radio personality, Greg Bayliss, was hosted by the owners and creators of Cockington Green Gardens, Doug and Brenda Sarah along with members of their extended family.   Guests included many former tourism industry representatives, former ACT Tourism Commissioner, David Marshall, past and present staff members as well as High Commissioners and Ambassadors from countries represented in the International Display.

Doug Sarah provided a very humorous and insightful speech which told of all his challenges in setting up the attraction, a journey that commenced in 1973.   He also paid tribute to his wife Brenda as his most trusted and valuable business partner as well as acknowledging the contribution of many other family members.

Mark Sarah followed his father in speaking to the audience about all of the valuable and long-lasting relationships built over forty years and of the absolute privilege that he feels in being able to work in such a respected and successful family business as built by his parents.

The celebration was held on a perfect evening which was a fitting stage for so many years of hard work and community contribution.